Save Time. We have the ability to reach a large audience of security industry service providers and consultants so you don’t have to waste time and effort trying to identify security guard companies to contact.

Save Money. We can show you the savings and return on investment when you use a security guard vendor instead of employing in-house staff that you don’t have the time or expertise to train or manage.

We have the ability to reach security industry providers to get you security guard quotes. The city of Miami and the state of Florida tend to be on the higher side of crime rates in this country. That means security is something that all businesses, and even some individuals need to be concerned about.

You need all the facts at your fingertips, so you can make the most informed decisions about whom to hire, and what it will cost you to hire such personnel.

Keep reading to discover the most relevant data for hiring security personnel in Miami, FL.

Get an Instant Online Quote

The state of Florida experiences approximately 100,00 violent crimes per year, with roughly 1,000 murders, 5,000 rapes, and 25,000 robberies. In addition, there are another 670,000 property crimes reported throughout the state annually, with 460,000 cases of thefts of personal property. Of all the violent crimes committed in the state, almost 4,000 of them happen to Miami residents. As a result, Miami has a Crime Index of six – meaning that it is safer than only six percent of all cities in the U.S.

In the city of Miami, your chances of becoming involved in a violent crime are roughly 1 out of 138. That figure might seem to be reasonably safe, but it’s far higher than many other cities. It certainly does not put Miami in a very desirable position as a city that can boast of any kind of respectable safety record. 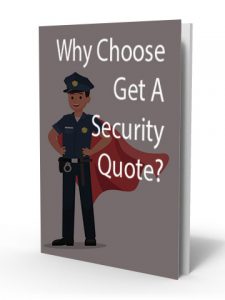 Need Security? Download Our E-book to Discover How GASQ Makes a Difference!

Not sure if you need Get A Security Quote to help with negotiating your security guard needs? If so, download our e-book to discover the time and money saving benefits of working with us!

In Miami, FL, as in most American cities, there are several different types of security guards that businesses and other concerns need.

Malls and banks tend to favor armed security guards who are capable of taking on higher risks, as well as a more involved approach to their jobs.

Unarmed security guards are commonly found in warehouses, museums, and on corporate premises. These types of guards primarily are charged with observing and reporting on what they see, and not necessarily taking any direct action.

For the most part, security guards are charged with the functions of observation and detection, monitoring, deterring, preventing, and ultimately reporting. Some Miami security guards are hired to patrol the premises of a venue, while others are stationed at a single location.

Those who patrol specific areas are generally expected to circulate among crowds of people, and when necessary, evict, prevent, or apprehend individuals who are engaging in undesirable behavior.

All security guard positions in Miami require vigilance from hired personnel, as well as conscientious attention to detail. Some posts also require that the security guard be well-versed in customer service, especially those positions tied to corporate enterprises.

Several factors come into play when it comes to determining the cost of hiring security services in Miami.

Ex-Military and Off Duty Police

If you choose to hire a guard with an extremely high skill level, such as an ex-military individual or an off-duty police officer, the price per hour would be closer to between $60 and $100. What you’re paying for is the level of experience and the knowledge that these guards have. A basic unarmed guard with little or no experience would be at the low end of the totem pole, whereas a highly experienced veteran would be all the way at the top, commanding the highest salary.

How to Get a Quote For a Miami Security Guard

One of the best ways to get a security quote for Miami, FL security guards, is to use a popular online search tool named GASQ. Using this tool provides you with access to a large number of security service providers and consultants. It saves you time and effort over conducting a manual search and delivers you more candidates than you find on your own.

Get a Security Quote (GASQ) will put you into quick contact with several security companies capable of providing the services you need. One of the great things about working with GASQ is that we virtually eliminate under-bidding, so you end up paying rates that are in line with industry standards for whatever services you require.